NOTE: This section comprises compasses utilised for civilian purposes (geology, mining industry) and also their military versions with which fire arms can be directed - although only in a gross manner.
The following list shows only the names of all manufacturers of the compasses exhibited here who could be identified. Other exhibits still lack identification. Discover them while browsing around. For any information concerning the numerous antique U.S. makers (like J. Hanks, Rittenhouse and many others), we recommend the websites www.surveyhistory.org and also www.surveyantiques.com.

AHREND was probably not a maker but a retailer. Also known are Ahrend-Klino signed drafting instruments.

DESCRIPTION : Instrument called in French goniomètre-boussole and in German Richtkreis. French teaching manual (printed 1956) for the Saint-Maixent military highschool. Two similar instruments are described therein: a French and a U.S. system (note: the abbrev. G.B. stands here for the French designation Goniomètre-Boussole). It describes the French version of the Instrument CIRCLE, AIMING M1 (see U.S. Army user instruction TM-9-1290-357-15 online HERE). The needle is located inside the main cylindrical casing. The older markings (covered with green paint) W.P.B. 1942 F.A. stand for War Production Board / Field Artillery.
NOTE: compare to the Russian systems designed by Mikhalovski & Touroff and used in the Czar's imperial army and in the USSR's Red Army.

PROFILE - William (Wm) A. & S. was a U.S. instrument manufacturer who was first to produce the BRUNTON-type pocket transit compass (see below) and the lensatic model M-1938 (more information HERE).

PROFILE - For information about this compass manufacturer and many others not listed here, visit the Virtual Survey Museum
(see LINKS). 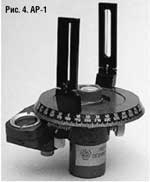 Arsenal is an old manufacturer located in Kiew (now Ukrainia) since 1764.  Survey materiel production started only in 1946.  The Arsenal icon used to feature a soviet "hammer and sickle" symbol in a prism but it was deleted later (in the 1990's ?). Typical products: see B-Sh-1 below (see list of Russian logos here : ZENITCAMERA)

PROFILE - Former British manufacturer of various instruments (microscopes etc.) in the 2nd half of the 19th C. He was located 244, High Holborn, London (1851-1909) and retailed also items made by F. Barker & Son (below).

PROFILE - Former British manufacturer (for more information click HERE and in our LINKS).
Barker built prismatic survey compasses based on Schmalcalder's patent (green paper card). The next development was a cut-away aluminum card.

Other examples of survey compasses made by F. BARKER & Son in his own name or for retailers:
- BAKER Charles (above)
- BROWN (below),
- Lawes Rabjohns Ltd,
- ABNEY level. 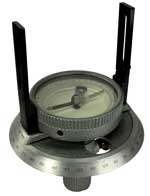 PROFILE - S. Bloch was an optician established in Strassburg (located now in France but part of the German empire before WWI).
He is listed in the clients register of the French manufacturer HOULLIOT. 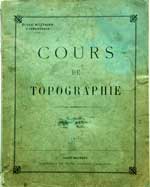 PROFILE - The French Army 0fficer (capitaine) Brèche (no data available) taught military survey technique at the infantry school in Saint-Maixent. He published in 1911 his complete lecture course in which he described the compasses  HOSSARD,  ROSSIGNOL, SOUCHIER and PEIGNÉ.

At r. : cover of the manuscript

PROFILE - German company located in the city of Kassel (also written Cassel in ancient times). For more information click HERE. NOTE: This company is NOT sponsoring this museum.
See also in the section MARCHING COMPASSES.

The oldest instrument we know of (and also own) ist this large pocket-watch-shaped model with integrated clinometer made in the very first years of existence of this company. 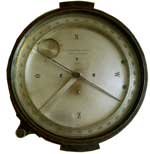 Pic. at right: large standard survey compass. The photograph was kindly transmitted by a visitor living in Indonesia, a country that was a Dutch colony until 1945. This explains why the cardinals are written in Dutch (south = Z for ZUID).
Tech. data: 360 deg. counter-clockwise, with half-degrees divisions, 1st half of the 20th C.


All contemporary model names (below) begin with the abbreviation CO (for COmpass).

PROFILE - J. BROWN, 76 St. Vincent Street - GLASGOW (no other info available). Most probably made by F. BARKER (see catalogue below).

PROFILE - Brunson Instrument Company was created in 1927 and merged with Keuffel & Esser.

PROFILE -  D. W. BRUNTON was the inventor of the pocket transit compass called after him. For a comprehensive website about the instrument and its inventor click HERE. Several companies built this instrument, among others Brunson, Dietzgen, Fennel and Keuffel & Esser. See also the versions made by HARBIN called DQL-8 & DQY-1. The company BRUNTON(.com, profile in Wikipedia) doesn't provide on its web site any address nor any means to contact them. See also Marching Compasses / BRUNTON.

PROFILE - Russian Schmalcalder-type compass. The two letters stand for Буссоль Шмалькальдера. The manufacturer was ARSENAL (logo: a prism, it used to feature a soviet hammer and sickle symbol) located in Kiev (see history in Wikipedia and click on Russian Language for a picture of the logo). See more examples of logos here: NOVACON (look for K as in Kiev). See more instruments on the website Russian survey compasses. 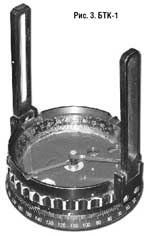 PROFILE - Russian-made compass. The three letters stand for Буссоль топографическая круговая i.e. circular survey compass.  The designation circular was chosen because there is also a cylindrical type (цилиндрическая буссоль - follow the link to a table with definitions). Made in 19... ? 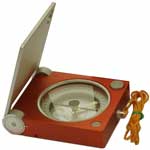 (Provisional location)
Manufacturer: Steinheil was a manufacturer located in Ismaning (near Munich Germany, read the full story in German in Wikipedia and here in FENNEL).
See also the marching compass types issued to the units of the West German Army (Bundeswehr) since its creation in 1956:
ASKANIA, BÉZARD, BREITHAUPT, BUSCH, WILKIE etc.

PROFILE - Two Russian makers with almost the same name of German origin are known: Karl Borkhardt (Карл Борхартъ) of Moscow and A. Burkhard (A. Бурxaрд) of Leningrad. The former is known via a 1912 catalog and the second through a compass bearing the name of the owner K. K. TIMM engraved on a compass type like the standard ones made by Voigtländer, Plath etc.

PROFILE - Burnier was Captain with the French Artillery. He invented in 1832 two instruments, a compass and a level. The latter was widely used within the Army. A comprehensive description of both can be found in the Bulletin de la Société d'encouragement pour l'industrie nationale (issue 1833, copy available). 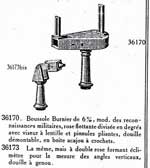 The compass was described as being more practicle because smaller and much cheaper than Henry Kater's design (i.e. Schmalcalder's improved version). A detail drawing shows an instrument with a magnifying glass (3x) through which a rotating graduated cylinder driven by a magnetic needle can be observed. The sighting device was a folding bow with a horse hair. The level was built according to the same principle concerning the compass but featured in addition a rotating lever remaining horizontal when the instrument was tilted and pointing to the value of the elevation angle along a curved scale. An improved version appears in Secrétan-Lerebours' 1853 catalogue (fig. HERE). It was manufactured until the 1930s.
One item features the logo of the maker Deglise & Lecomte (see the compass made by cptn CHAIX).


The item displayed below seems to be the latest and most advanced design.

This instrument called in German Erdfeldmesser (earth field meter) was also used in the German army to measure residual magnetism in metallic ships and aircraft in order to determine the best place to install the compass. Excerpt of the description in a BUSCH Brochure:
"New development of an 'earth field meter' based on the principle defined by Friedrich Bidlingmaier in 1907 of a double compass (Doppelkompass): the measurement is effected via the influence of the external field onto the fields of two permanent magnets (compass needles) placed above one another on the same axis at a short distance of each other."  See another instrument still in use in the BSH's Magnetkompasslabor.

Cary of London produced various instruments like this small (dia. 2.5") Schmalcalder-type compass below at left. A much larger one (4", unsigned) features an inverted arrangement of prism and sights. 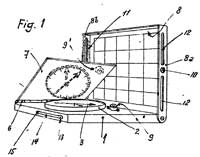 The museum offers numerous original documents for sale:
- Facsimile photocopy of vintage User Instructions for the models Universelle and Broussarde and for the Clisimètre can be ordered (18 p., French and English).
- See complete list (patents, flyers, manuals etc.) in the French version HERE.
- Description and user instruction of the Peigné compass types (square bakelite and cylinder-shaped metallic versions) in the Topochaix catalogue.

PROFILE - This item is idendical with an instrument formerly made by LIETZ. The country name "JAPAN" is printed above the "S" mark.
We suppose that LIETZ (after having been taken over by SOKKIA) had their products made under license in Japan.
Charvoz or Charvoz-Carsen Corp was big in the drafting side of the business in the US.
They even owned a survey division called THS which all of their instruments were made in Japan.
An identical instrument bears the name LUTZ.

The metallic compass in the 2nd row was made by the Chinese company Union Instrument Factory. (The Online Compass Museum doesn't possess any information about this company. Your help is welcome.)
An early version was a wooden box and is listed in a 1910 Japanese TAMAYA catalogue. Today, only one Chinese manufacturer is known to exist: HARBIN Optical Instrument Factory (P.R. of China).

In 1858, the French "businessman" (négociant) Louis-Paul CHOLLET-DELAMARRE was granted the patent no. 35.437 for an "exploration compass". Its design joined the characteristics of several preceding models like folding sights with hooks (one of them with a bubble level), inclinometer and a sundial. The inventor adds that this design is an evolution of the Chevalier compass. The latter could be the instrument described in the entry 'Surveyor compass (vintage)'. Pictures © INPI

This instrument appears in a 1930 MORIN catalogue and is called clisimètre à collimateur respectively niveau-lyre du Colonel Goulier. It was used together with a survey compass like the CRC or HUET system. When hold by the ring, the pendulum's weight ensures a vertical position, i.e. the horizontal position of the scales' zero references. One can then look through a magnifying glass at a long vertical display. There were different versions for general survey works, for the Army, for the climbers association Club Alpin (C.A.F., also called Vallot model) etc.
Users instructions: Look through the magnifying glass and read the value on the scale of slopes which can be seen alongside the actual landscape. 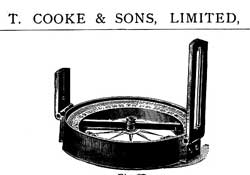 Description : Survey instrument designed for measuring right angles in the simple version and any angle in the sophisticated version. The latter are called in French goniomètres à pinnules or pantomètres in MORIN's catalogue. The corresponding designation in German is Kreuzkopf or Winkelkopf. The simple version existed either in an octagonal (see example: SECRÉTAN) or a cylindrical body (by MORIN recommended shape). It featured a hollow body with sighting slots in which horse hairs are attached. Each slot faces another one which is cut in the opposite half related to the height, so that an horizontal plane can be determined. The cylindrical systems with a precision chapter ring around the body only had 4 slots. In Germany they were manufactured by the ancestor of the company now called FPM Holding.

PROFILE - Former French company that built (among others) the marching compass type Modèle 1922.
The instrument shown below is called Modèle 26. It is marked  Boussole topographique (i.e. Survey compass) but together with the abbreviation M.G. for Ministère de la Guerre, which meant it was issued to the armed forces by France's War Department (and probably also Belgium's).
For description and pictures, go to HUET who built a modernized version after WWII (modified in 1957).