The word cardinal is taken from the Latin cardo which means a hinge. The oldest names known (in the Mediterranean area) for the four cardinals are probably the ones used in ancient Egypt and in the Old Testament and were hence coined at least 4000-3500 years from now.
The Egyptians, like the Chinese (s. table below) by the way, defined the directions facing south (resut) and north (mehet) behind them. East and west were hence called like left (jAbt / yapteh) and right (jmntt / yemnet). South was not only the position of the sun (the god Ra) at noon, it was also the origin of the life-sustaining river Nile. 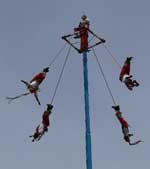 The ancient Maya language and calendar had many various representations of the cardinal points. The Indians in Mexico and Guatemala still perform the dance of Voladores (see Wikipedia) : the four ropes represent the cardinals, a fifth man on top of the pole symbolises the sun (sometimes, a sixth one stands for the moon). They rotate in 13 turns down to the ground. The product of 13 x 4 is 52 equaling the number of years in the Maya / Aztek calendar.
Picture at left: The cardinal point west (chik'in) courtesy ARTE, Deciffering the Maya code after M. D. Coe.
Picture at right: „El Tajin Los Voladores fcm“ by Frank C. Müller. Licensed under CC-BY-SA 4.0 Wikimedia Commons. https://commons.wikimedia.org/wiki/ File:El_Tajin_Los_Voladores_fcm.jpg#mediaviewer/ File:El_Tajin_Los_Voladores_fcm.jpg

The cardinals also were Israel's borders, i.e. the verdant mountains of Lebanon to the north (in Hebrew Tsafon), the barren mountains of Edom to the east (Kedem), the desert to the south (Negev) and the Mediterranean to the West  (Yam = sea)
Source: The riddle of the compass by Amir D. Aczel.

The linguist Guy Deutscher explains in the New York TIMES how the native speakers of the Australian aborinal tongue Guugu Yimithirr (North Queensland) use the cardinal directions to describe things where we usually say left or right, in front of or behind oneself, words that they don't know, and orientate themself immediately and automatically while speaking.

Symbolism of the cardinal points

The European civilisations and the philosophers have associated with the cardinals points common characteristics —often contrary— of the people living in the regions lying there. Examples: North was for the ancient Greeks the place where barbarians but also men of great wisdom lived, but for the people living there, south was characterized by the joyful life (sun versus fog) but also with the lazyness provoqued by the heat... The French journalist and philosopher Roger-Pol Droit published in Le Monde (July and Aug. 2014) fours articles about this topic (copies available). 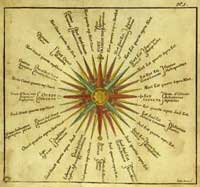 The rose of the winds (or wind rose) was so named because the divisions of the circle were originally named after the main winds blowing in the Mediterranean. The four main ancient Greek wind names were: Boreas (cold north wind), Apeliotes (east wind), Notus (dry south wind), Zephyr (warm west wind) from the tower of the winds in Athens. These wind names were later noted with their initial letter (see below and examples in the table : Spanish map dated 1583, and in the section Nautical Compasses the instruments signed by BAUDUF and ROUX). The names are indicated in full words in different languages on some descriptions, such as on the print at the top of page) generally in Italian, but also in Spanish, Provençal or Latin. The windrose at right also gives names for a further subdivision (32 points) like aquilin or zéphyr,  which should be well-known to all those who learned the famous French poems written by La Fontaine, Le Chêne et Le Roseau: " Tout vous est aquilin / Tout me semble zéphyr " (The oak and the reed: "What for you is a North wind is for me but a Zephyr").

Pic. at right - This print was part of an ancient book by the famous French cartographer Nicolas Sanson d'Abbeville (1600/1667),
re-edited bei TERRES in Naples in 1794. Click on image for enlarged view


At some time in Greek antiquity, only north and south were fixed directions. The names of the winds blowing in between gave birth to a total of twelve names in four groups (Aristotle, more details in Thomson - see Bibliography below):


Picture at right: In Russia and countries with orthodox churches the cross features a tilted lower bar
aligned on the north-south axis. The end pointing to the sky is the northern end.


THE NAMES OF THE CARDINALS ON COMPASSES IN SOME LANGUAGES

Nowadays, the cardinal points of almost all compasses in the world are written in English (N-E-S-W for North - East - South - West). In ancient times though, the abbreviated Latin designations were used by Westerner compass makers and in many countries the cardinals were indicated in the national language. Here are some examples:

The different ancient systems are described in the sections RELIGION / Chinese Tradition and Nautical Compasses / China. A compass is called in Chinese Luo pan. Compare to JAPAN.