CLICK HERE TO OPEN THE GLOSSARY TABLE - in the table below: use the short-cut Ctrl+f (Windows) or Apple+f (Mac) and write the desired word in the search window.
You will also find more information about some of the following terms in the online encyclopedia Wikipedia.
The Canadian governmental translation office Termium offers many translations and definitions in French, English and (partly) Spanish.
The international standard ISO 1069 gives definitions in English and French.

in Russian) before WW II and until the End of the Communist regimes an ambitious hiker, who knew how to use a compass and a map in a landscape without direction panels! The German word Skitour still designates today cross-country skiing. In its catalogue for compasses for the late 19th century, the BARKER company offered a "HEIGHT RECORDER for Alpinists, Automobilists, Aeronauts, Cyclists, Tourists, etc." (See picture of the same item made by the German company LUFFT in the Thirties in the category MARCHING compasses and the instruments made by  "S" C. Stockert).

In the former Soviet Union (USSR / CCCP), East-Germany (GDR) etc., young sportsmen were awarded specific medals (see table below and also Wikipedia in German language : Leistungsabzeichen für Jugendliche in der DDR). The Junger Tourist (young Tourist) was not at all a young tourist as we understand it today! He or she was someone who could perform several technical tasks like experienced girl or boy scouts, from putting up a tent to orientate herself or himself with a compass to recognize animals and flowers etc.

Pic. at right: Conditions to fulfilled to be awarded the Tourist's medal (GDR)
Transl.: The pioneer must be able to read a map, know the main symbols of the legend on maps with different scales (1/25,000 and 1/100,000), orientate the map, determine a marching course using map and compass and hike for 3km. 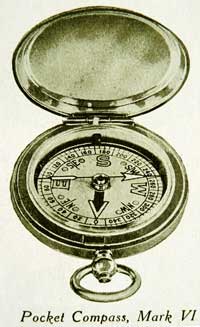 The word Mark (short 'Mk') followed by a figure (arabic or roman numeral) or even the figure alone appears on numerous pocket and marching compasses from the late 19th century on until to-day.

We have no evidence of pocket compass numbers below Mk. V but there was a Mark IV marching compass (see below).
It seems that the first occurrence was a Mark V pocket compass (example: F. BARKER & SON, Short & Mason) with a Singer's pattern card. It was followed during the first World War by a Mark VI design for which there is a precise contemporary description. The Swiss author Paul Dériaz wrote in 1917 among other books about orientation and compasses a manual called in the augmented English translation 'The PRISMATIC COMPASS and how to use it'. Here is the description of the Mark VI pocket compass in this booklet:
"This compass is of the watch type with a dial 1 9/32" diameter and has recently been improved. It differs from the Mark V in that the dial is graduated every five degrees instead of points of the compass and figured every 20 degrees." (He was referring to the Singer's patent design which featured only 32 points and half points, i.e. only 64 possible angle values in the whole).
"Also the North point is marked by a radium-painted luminous arrow, the E. S. and W. points by luminous letters and every intermediate 30 degrees by luminous dots. Instead of the lubber mark a black hair line is drawn across the glass, near the ends of which are radio-luminous marks, one being arrow-shaped. This instrument is accurate within three degrees." 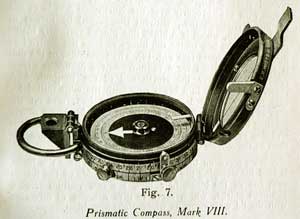 In the late 19th C. a technological transition took place with the introduction of the much more precise prismatic system. The first version known was signed by F. Barker and featured a Singer's patent card. While a non prismatic marching compass designated Mark III was still produced in 1887 by J. H. Steward and called "VERNER COMPASS" the first prismatic VERNER'S pattern was numbered Mk IV (Newton & Co.). It was soon followed by the models Mk V and Mk VI (for examples go to Compass collector). The next higher figure was Mk VII (description: see  Ed. KOEHN). This instrument was equiped with a plunger on its side with which the card's movements could be slowed down. In addition, it featured on the opposite side a card locking lever. It was quickly followed by the Mk VIII (fig. left, for descr. go to F-L), the only difference between them consisting in "a knife-shaped clip fixed to the lid so that the act of closing the lid causes the knife to engage in the groove of the sliding screw, and so automatically lifts the dial."  (Quoted after The prismatic Compass, by P.  Deriaz).
A facsimile of original User Instructions can be ordered (click HERE to see a photograph of page one). 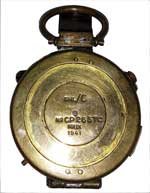 In 1930 F. BARKER & SON developed a new compass equiped with a fluid-damped disc which was called Mk II. Soon after this, in 1932, the model Mk III was created and remained in use until after WWII. Many manufacturers like T.G. Co. Ltd, but also C.K.C (Canadian Kodak Company), E.A.C., SHL (...) etc. also produced Mk III compasses. However, when the serial number contained the letter 'B', it meant that these instruments were in fact manufactured by Barker and these other companies were only pretending being competitors. These companies had also produced at the beginning of WWII a compass designated MK IX which was identical to the Verner's pattern Mk VIII but without this name being mentioned since the patent protection had finished. The case featured a black paint coating unfortunately scratched off on the item displayed at right.

In the last WWII year, a square-shaped dry compass called MARK 1  was produced, signed by T.G. Co. Ltd. and made of black bakelite. Thee MK3.A is a later version of the MK III made in Australia (and in India?) after the patent expired. Glauser produced in the 1970's a cylindrical liquid damped compass called Mk.4, based on the Mark III's design. SISTECO also produced a MARK IV called M-71 model.

After WW2, Barker gave their compass versions the number of the year during which they were developed (Mk-71 in 1971, Mk-72, Mk-73 etc.). The last development was the Mk-88.
NOTE: For more details concerning all the Barker models (e.g. pattern 42, Mk IX, Mk X) and their chronology, please visit the excellent website TRADEMARKLONDON.com (see also LINKS/F. BARKER).

The British MOD defines its requirements for supply of instruments, weapons, equipment, by the issue of patterns.  Any supplier may manufacture and offer such items for sale, but those items will be examined and certified as type-approved, i.e. they comply with the official pattern.  A pattern number is purely a mark of compliance to a standard set out by the Ministry of Defence, and not a mark of who may have manufactured or sold the item.

The rotation axis of the Earth defines the geographic North and South poles. This theoretical line can be "seen" at night in the sky: it goes past the Polar star (by approximately half a degree). The magnetic poles are created by the Earth's molten iron core.
The discrepancy between both was discovered by Colombus but since he had an immense confidence in his compass, he thought, the stars had changed place. The angular difference between both is called declination. This angle is being measured since the 16th century. Ancient recordings made in Paris and London (see list below) show that the magnetic pole as seen from Europe apparently moved within 25 degrees  West and 5 degrees Est. This information appears on maps (direction and rate of change at a defined moment). It is also taken into account on compasses: either by means of a small arrow besides the geographic North mark (see MORIN) or of an adaption device (see HUET). In vast regions near the magnetic pole like North America, the need for adaption is far greater and compasses usually feature a range of approx. 32 deg. West to 32 deg. East (see LIETZ). As seen from Europe, both poles are currently located almost on the same line, i.e. the declination equals zero (half a degree in Paris) while it still was approx. 10 deg. West during WW1 (see NOTE in the cover of a compass). 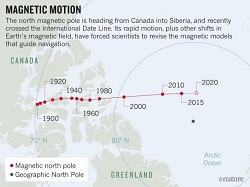 The magnetic North pole's position was first discovered in 1831 by James Clark Ross and Roald Amundsen observed in 1904 that this location had changed. The Canadian Government has been measuring the pole's position regularly since 1948. The magnetic pole keeps moving North and will go past the geographic North pole and reach the Russian island of Severnaya Zemlya in 2050 based on the current speed and rate (see at right).

To compute the magnetic declination at any position and date (in the past) use the National Geophysical Data Center's calculator.
Example of indication
London, February 2010 : 2.6 east, increasing each year by 0.7 deg.