NOTE: the following article deals with the original Bézard compasses and their imitations but detailed information is still missing. Thank you for any detail concerning the production years of the various models. The Online Compass Museum would also be very grateful for any documentation (original or copy) concerning this instrument's history and technology (for our email address: see CONTACT).

This compass was officially designated on the boxes (see below) "Diopter-Orientierungsbussole" i.e. magnetic compass with alidade, but it became very famous under the name "Bézard-Kompass". It was immediately adopted by the Austrian Imperial Army (click HERE for list of official decrees) and then later in Germany as a result of intense lobbying.

It can be seen in the hands of the Austro-Hungarian explorer, Count László Ede Almásy in photographs dating to the early 1930’s. Almásy had explored the Libyan Sahara where he discovered the famous cave paintings. His life was covered in the Anthony Minghella film "The English Patient" (click on the photograph for enlarged view).
This scene, that only lasts a few seconds, was probably only for publicity. A sighting operation takes much longer, and in such a short time frame the needle would not be able to settle !

NOTA : This photographic still from the film "The Sahara – a Lost Paradise" has been kindly provided by the Science Vision © production company www.sciencevision.at who also pointed out that it is not an original shot, but a modern production.

The 1902 patent describes a wooden casing. As soon as 1906 a second larger version was available. It had an aluminium case and a mirror. The division was more precise (every 2° instead of only 5°). During WW1, the case of the Army models was made of a Bakelite-type material called Hartgummi (hardened natural rubber, check Ebonite in Wikipedia) in the documentation. Later produced models were made of aluminium. The basic model called Spiegelmodell 1906 (mirror version) was later modified into Armeemodell 1910 II. The version produced from 1913 on with markings in radium paint was called "R".
A civil version (card calibrated in 360 degrees) and a military version (6400 MILS) were produced. This graduation could be ordered in clockwise or anti-clockwise versions. The small model was available with (I S) or without (I) the mirror and only calibrated in 360 degrees.
J. von Bézard published in 1907 a long article in the military review Streffleur (s. below Bibliography) when he was teaching at the Theresianische Militärakademie in Wiener-Neustadt, in which he stated the prices (wood: 6,80 and alum. 13,50 Kreuzer) and that orders had to be sent personally to the inventor Hauptmann von Bézard.

The German version of the Bézard compass was manufactured by the barometer manufacturer Georg LUFFT located in Stuttgart. Three different logos were used. The most common ones are the letters G & L together with a drawing compass or the Name LUFFT in gothic fonts. A very seldom used one, and probably the oldest of all, features a flat cylindric shape with an axis and the name LUFFT (seen on older barometers and Bézard compasses).

The appearance of the dial and the needle has had two distinctly different forms. The very first was arrow-shaped while the later one (from the 1930s on) featured the famous circle at the southern end.


The first models were equipped with an aluminum lid that quickly oxidised (picture left). It was replaced with a nickeld brass lid. From the 1950’s (exact date ?), it was painted military green for the German and French armies and for the German Border Police (former BGS, now Bundespolizei).
At the base of the lid there is a 50mm slide on the large model II. After WWII, a 40mm ruler was also engraved on the small models' lid. The exterior of the lid bears the word DIREKTION (or DIRECTION but also RICHTUNG) across an arrow indicating the direction of travel. On the inside of the lid is a luminous arrow in card that is fixed with two screws.
The export versions were marked DIRECTION or the respective translation. One of the series (Austria Imperial Army?) bore the word RICHTUNG instead of DIREKTION. The typography is interesting: the horizontal bars of the H and the T are inclined and aligned like runes carved in soft wood.

There have existed three different versions.
On the large Model II (1910) it was soldered to one half of an hinge, the other half being screwed to the Bakelite casing (see below, left and HERE). On later models they were shaped to build a part of the hinge (see model UBK, below right). The mirror was not perfectly round like on the small model but elliptical with a short nose to erect it more easily with a finger nail.
On the small model IS (center - the letter S is the initial for the German word Spiegel, mirror), its hinge was not in the middle but close to the lid. It had a small triangular cut-out for the course index.
The latest model (UBK FLUID, at right) also featured an additional small cut-out (like a moon quarter) on the fringe.

GRADUATION IN MILS AND GRADIANS (GON)

(With regard to the use of MILS, see the chapter “MISCELLANEOUS /Divisions).

The oldest known MILS divisions on a Bézard compass is dated 1915 (during WW1) on a small model. It was also probably introduced at about the same time on the large model. The technical solution was very low tech: a stripe of photographic paper was glued onto the crystal. The graduation was divised into four traditional quadrants (0-1600, the zeros facing East and West) and a table was added in the lid.

On the large model, an additional ring-shaped disk made of aluminium with MILS divisions could be inserted between the crystal and the original rose with degrees divisions, thus covering only the degrees scale but not the cardinal points. The crystal was easy to remove so that the MILS ring could be oriented  with the zero mark facing either North or South (see 2nd row). In the same time, the declination could be adapted

In the first manual by Major Gallinger (1929, p. 8, Fig. 5, see chapter Technical Publications) it is said that the MILS zero/6400 division was facing the South marker and respectively the 3200 division was facing the North mark in order to "conform with devices used by artillery and heavy infantry weaponry". For artillery and often also for navigation in the old days it was usual to take a bearing FROM the target, which explains the 32 at north and 64 at south. This feature is also to be observed on other artillery instruments like Winterer's military compass.

Furthermore is a version of the small Armeemodell known which bears the special 6300 MILS graduation which was only used in Sweden's Army (see ex. under Lyth, Milton & Co and Silva), but the cardinals are printed in German.

DESIGN OF THE ATTACHMENT RING / LOOP

The most evolved model, aimed at soldiers and ambitious hikers, was the Universal Bézard-Kompass (UBK). The sighting slits had two transversal wires at mid-height thus forming two reticules. Using these, with the spirit level and the pendular clinometer incorporated in the lid, one could take fairly accurate bearings in three dimensions and even approximately aim pieces of artillery.

The last model marketed (until 1996) by LUFFT was a liquid dampened version known as the FLUID BÉZARD. These two words replaced the classical ORIGINAL BÉZARD crystal marking which had also been used in a first development, two versions of which are known to have existed. Both featured a (for Bézard absolutely unusual) red-and-white needle like some WILKIE and PASTO pocket compasse. This was probably the result of some kind of co-operation because WILKIE mastered the liquid dampening technology very early after WWII. The older version featured a capsule with bellowed bottom like a barometer''s capsule. The other obne was totally transparent.

The modern issue existed in a civil version, a military one and even as a wrist-top compass with the abbreviation 'Bw' for Bundeswehr, i.e. West German Army. In addition to the circle at the needle's South end, the crystal's North mark featured two converging lines in which the needle's arrow head was to be set. In the military version, the words FLUID BÉZARD were placed between two white lines representing the WEST-EAST axis.

There is no evidence that the Bézard compass was ever issued to the Wehrmacht troops during WWII, but several European armies adopted it before and after WWII (see VARIANTS further down).
The UBK was, for a long time, the instrument recommended by the German Alpine Club (Deutscher Alpenverein, DAV). 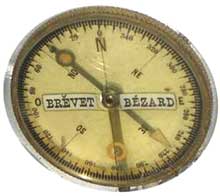 The lid and/or the dial on the export versions were generally adapted for each client country:

In some countries where the German company LUFFT didn't export the instruments, major manufacturers made them using their names and logos (as licensees?) like Cornelius Knudsen in Denmark or GAMMA in Hungary. Other items are not absolutely identical and we think that they are imitations like the Czech makers OPTOS, OPTIKOTECHNA and "SŠP" (see below) or the Hungarian MOM/41, the East-German FPM and the Romanian I.O.R. The same dial design was also used on the FALKE compass.
See also TRIUMPH